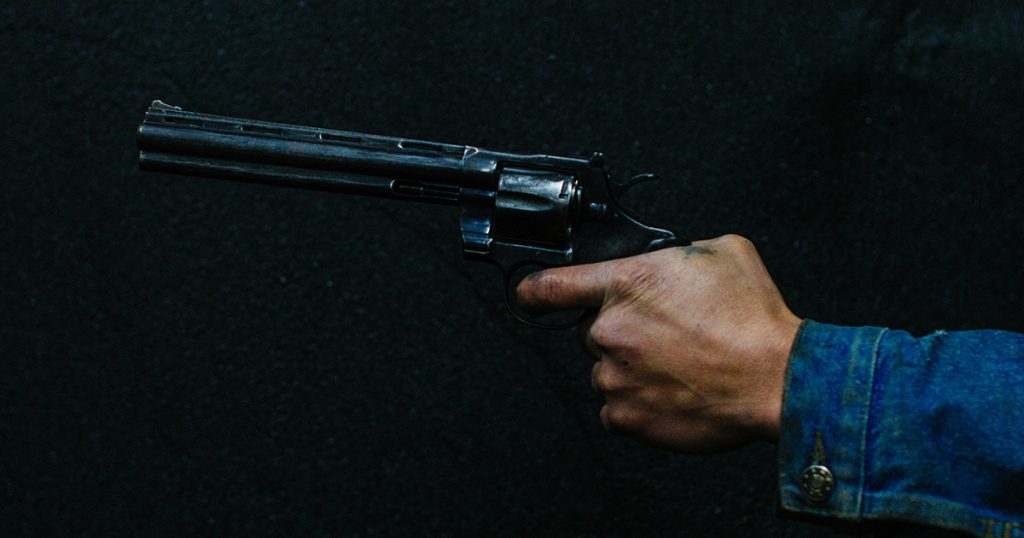 A long time ago in a galaxy far, far away a notorious scoundrel shot a bounty hunter. The question is, was this shooting a homicide or was it justifiable self-defense?

This is what we know. Han Solo is a smuggler who takes a job transporting two passengers and two droids to a neighboring star system. While preparing the ship for takeoff, he is stopped at gunpoint by a bounty hunter named Greedo. Throughout their conversation, Greedo has his weapon pointed at Han. There is a dispute over money, with Han saying “Over my dead body,” to which Greedo replies, “That’s the idea. I’ve been looking forward to this for a long time.”

The actual incident  took place on a planet called Tatooine. It’s an infamous spaceport regarded as a hive of scum and villainy. [1] Obviously, this is all fictional. But because of all the controversy,[2] this post will apply the laws of Florida to the shooting. Scum and villainy anyone? We’ll attempt to settle whether in the eyes of the law Han is a murderer or a victim.

In case you haven’t seen the movie, here’s a transcript of what went down between Han Solo and Greedo:

Greedo: [In Huttese; subtitled] Going somewhere, Solo?
Han Solo: Yes, Greedo. I was just going to see your boss. Tell Jabba I’ve got his money.
Greedo: It’s too late. You should have paid him when you had the chance. Jabba’s put a price on your head so large, every bounty hunter in the galaxy will be looking for you. I’m lucky I found you first.
Han Solo: Yeah, but this time I’ve got the money.
Greedo: If you give it to me, I might forget I found you.
Han Solo: [stealthily going for his blaster] I don’t have it with me. Tell Jabba …
Greedo: Jabba’s through with you! He has no use for smugglers who drop their shipments at the first sign of an Imperial cruiser.
Han Solo: Even I get boarded sometimes. Do you think I had a choice?
Greedo: You can tell that to Jabba. At best, he may only take your ship.
Han Solo: Over my dead body!
Greedo: That’s the idea … I’ve been looking forward to this for a long time.
Han Solo: Yeah, I’ll bet you have.
[Han blasts Greedo, then heads out, tossing the bartender a coin]
Han Solo: Sorry about the mess.

Before we apply current Florida Law to Han’s case, let’s take a look at how the  “castle doctrine” principal became codified into the current “Stand Your Ground” law.

The term “Stand Your Ground” law is not a standalone statute, but in fact refers to a group of statutes; FLA. STAT. § 776.012, .013, .031, .032 that were collectively enacted in October of 2005. These statutes drop the previously held duty to retreat before using deadly force. Instead, they use hard rules and presumptions to dictate whether deadly force is justified.

That sounds complicated, so let’s break it down a bit more:

What was it like before Florida’s Stand Your Ground Law? A person could use deadly force in self-defense only when such force was  “necessary to prevent imminent death or great bodily harm” to herself or another. Weiand v. State, 732 So. 2d 1044, 1049 (Fla. 1999).

Before the enactment, justifiable use of force was a limited defense that required proof of retreat. An exception was made in “castle” cases, where no retreat was necessary.  Pre-enactment, the “castle” included the home and workplace, and individuals were not required to retreat to the wall. The use of deadly force to prevent an attack likely to cause death or great bodily harm was justified.

It could easily be argued that Han and Chewbacca were in their “workplace.” After all, they were just hired by Obi-Wan and Luke for a transport job; but for the sake of this article, we will be restricting the discussion to the applicability of Fla. Stat. 776.012 to determine if Han was legally justified in shooting first.

(1) A person is justified in using or threatening to use force, except deadly force, against another when and to the extent that the person reasonably believes that such conduct is necessary to defend himself or herself or another against the other’s imminent use of unlawful force. A person who uses or threatens to use force in accordance with this subsection does not have a duty to retreat before using or threatening to use such force.

If we pull apart the statutory language, we find three important questions:

So what does Han do if he’s charged with the murder of Greedo, and wants to assert a Stand Your Ground defense? To start, he would have to proceed with a pre-trial immunity hearing.

This pre-trial immunity hearing was addressed in Peterson v. State, 983 So. 2d 27, 29 (Fla. 1st DCA 2008). The Court held that when immunity under the law is properly raised by a defendant, the court must hold a hearing to decide the matter. This is done by confronting and weighing only factual disputes. Petersen held that a defendant may raise the question of statutory immunity pre-trial. The court must then determine whether the defendant has shown by a preponderance of the evidence that immunity attaches.

Should Han be able to prove the above by more than a preponderance of the evidence [3] that the statute applies to him, he would be granted immunity and could not be prosecuted for the murder of Greedo. Horn v. State, 17 So.3d 836, 839 (Fla. 2d DCA 2009).

If he fails to prove his case beyond a preponderance of the evidence, he would likely be fed to the sarlacc pit. This is not the outcome we want.

Using current Florida law as a guide post, the question before the court is simple. Based on Han’s circumstances, would a reasonable and prudent person in the same situation use the same force as did the defendant?

We also need to review what the reasonable person used by the Court would be aware of.[4]. During the brief conversation between Han and Greedo, a blaster is pointed at Solo’s chest. Greedo tries to rob him when he demands that he give him the money he owes to Jabba the Hut. He threatens to kidnap him by taking him against his will back to Jabba. Finally, he states his intentions to kill Han. So far, there’s a lot of negatives pointed at Greedo.

We must also take into account the surrounding environment. After all, environment has an immense effect on the state of mind of a reasonable person. So what’s happening in the area?

Before Greedo even accosts Han, Obi-Wan Kenobi cuts off the limb of a bar patron who was threatening Luke Skywalker. After, the bar goes quiet, then the music and conversation starts up again. Han tosses some money to the bartender as an apology for dealing with Greedo’s corpse.

Based on all this activity, it seems Mos Eisley Cantina is used to violence. Furthermore, conflict interference is not a standard part of operating. In short, Mos Eisley Cantina is the exact type of place one could be shot dead in front of a bar full of people. In light of his words and actions, Greedo has made it clear that imminent death is about to occur. Thus, a reasonable person would likely act in the exact same manner as Han.

But, our analysis is not complete. We must also examine whether Han had a duty to retreat when Greedo confronted him. The first and easiest question is simple. Did Han have a right to be inside of the Mos Eisley Cantina when Greedo approached him?

Though the Cantina appeared to be a “wretched hive of scum and villainy”, it also appeared to be open for business. Moreover, other than droids, it seems that the Proprietor of the Cantina welcomes anyone. Thus, Han (who was a paying customer) had a right to be there. The next question is a little sticker. Was Han engaged in a criminal activity at the time, and if so, does it matter? Here is what we know.

Han is a scoundrel and regarded as one of the best smugglers in the galaxy. This reputation makes it unlikely he is not acting as a criminal. After all, a criminal is usually being just that. But pursuant to § 90.404(1), Fla. Stat. (2015) character evidence is inadmissible to prove actions that would conform to that character. That means the fact that Han committed crimes in the past cannot be used against him to in this instance.[5]

When Greedo confronted Han he had been hired by Obi-Wan to provide passage to the Alderaan system. In fact, he was on his way to the Millennium Falcon to prepare for departure. This is not a criminal activity in itself. But the fact that Obi-Wan said he and Luke were being sought by the Empire is problematic. If Han was adding and abetting wanted fugitives, would that not constitute criminal activity? Perhaps, but even this scenario would Han have had a duty to retreat?

There’s an important precedence in all this, though. The Fourth District Court of Appeal has held it a fundamental error to instruct the jury that a defendant engaged in an unlawful activity had a duty to retreat. Specifically, this relates to self-defense claims based on section 776.012(1). Dorsey v. State, 149 So.3d 144, (Fla. 4th DCA 2014).

So what’s all this mean for Han? Well, let’s do some final sums:

Yes, Han shot first. But for those on the Internet with hurt feelings, there’s good news. By an application of Florida’s Stand Your Ground laws, he clearly acted in self-defense.

Not every case is as clear as this one. But hopefully this break down and application of the law will provide a little more clarity into these real world scenarios. And perhaps in your next Mos Eisley bar scuffle, too.

If you or a loved one have been arrested or charged with a crime please do not hesitate to contact Attorney Jason Seidman. To answer any of your questions, Jason can provide you with a free case evaluation.

Review your options, and put his experience to work for you. Call 954-740-0502 or email jason@defendingsouthflorida.com.

[3] 51% or greater chance that the facts are true. This is a much lower burden than the Reasonable Doubt standard applied in criminal trials.

[4]Remember, the reasonable person is situated in the same circumstances and knows what Han knew at the time.

[5] For purposes of completeness it should be noted that there are several exceptions to this rule, but a complete exploration of 90.404 is outside the scope of this post.